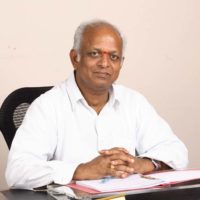 Sri G.Pullaiah has started his career as a teacher in Zilla Parishad. In order to fulfill his dream of establishing an Institution with traditional values, he founded Ravindra Vidya Niketan on the same lines as that of Viswakavi Gurudev’s Shantiniketan. Ever since its inception that institution has been expanding and today it is indeed a huge organization. He has started Ravindra Junior College in the Year 1996 and the institute has indeed produced many State rankers. Realizing the importance of women education he has also started Ravindra Degree College for Women in the Year 2001. In order to impart Quality Education further he has also started Ravindra Residential School and Junior College at Venkayapalli, within a close proximity from Kurnool and far away from the chaotic turbulence of the city environment. He realized the importance of technical changes in the field of education and started G.Pullaiah College of Engineering & Technology in the Year 2007. In order to empower the women community in education he has also started Ravindra College of Engineering for Women in the year 2008. He has also been conferred with the Best Teacher Award by the State Government of Andhra Pradesh for his various accomplishments. He is a strict disciplinarian and who has imbibed the traits of dignity, decency, decorum and punctuality. He is simple, modest and is available to the student community round the clock. The motto of Institutions that he has established ‘Join to Learn and Leave to Serve’ is true and he stands as an example to everyone in the field of education. His philanthropic attitude in the field of education has also lighted many poor lives.